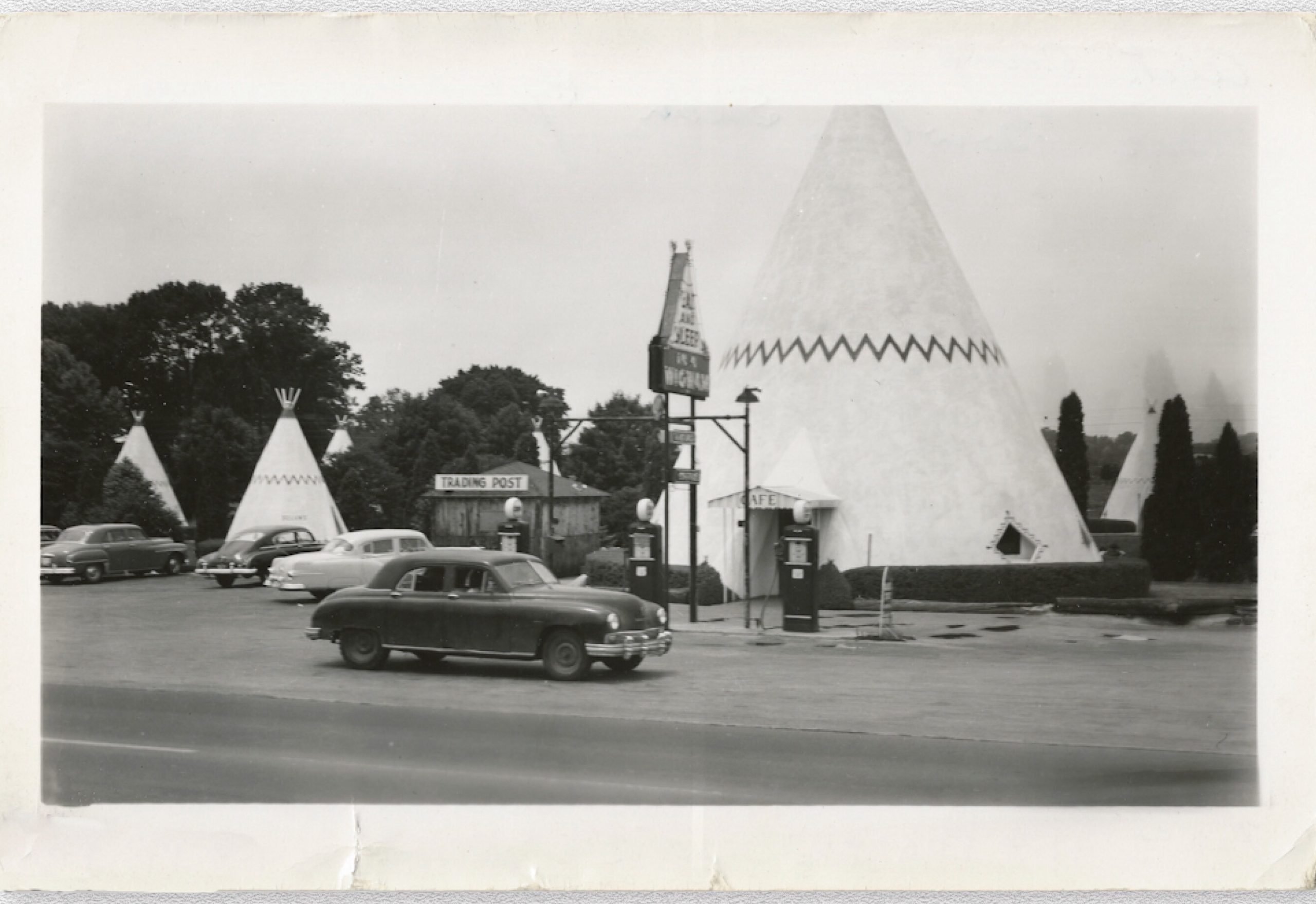 For the past 84 years, Historic Wigwam Village No. 2 in Cave City, Kentucky, has offered travelers and back-road explorers a fun sleeping experience during their visits to Mammoth Cave National Park or on their way to nearby Nashville, Tennessee, or Louisville, Kentucky. Built in 1937, when Americans were just beginning to discover the joys and excitement of automobile vacations, Historic Wigwam Village No. 2 and its gas station and lunch counter became a popular stop on long trips north and south. Even Eleanor Roosevelt wrote about it in one of her daily newspaper columns. Imagine driving along a two-lane country road when suddenly up ahead you see Wigwam Village’s white teepees and distinct neon sign — “Sleep And Eat In A Wigwam.” Today, this fantastical sight still lures motorists to pull over and stay a night or at least stop for a photo or two.

The lunch counter and gas station closed in the 1970s, but the 15-wigwam motel remains an enduring testament to an earlier time — but with all of the modern conveniences you would expect and want, including private bathrooms, air conditioning, coffee pots and free WiFi and cable television. Historic Wigwam Village No. 2’s four grassy, tree-lined acres include two, large fire pits where guests like to gather in the evenings, a retro playground, cooking grills and a covered, lighted picnic pavilion with tables.

Choose from two types of wigwams: a single (sleeps two) or a double (sleeps four). They feature the original hickory bed frames, caned chairs, night stands and vanities created by the Columbus Hickory Furniture Co. in Indiana almost a century ago. The bathrooms’ red-and-white graphic tile also is all original… and the showers have plenty of hot water.

Historic Wigwam Village No. 2 is one of only three surviving Wigwam Villages of the seven built around the country before 1950, It is listed on the National Register of Historic Places and is undergoing an extensive renovation to bring it back to its 1930s splendor and authenticity. Your patronage helps pay for ongoing restoration of the property in accordance with federal historical renovation regulations.

When you stay at Wigwam Village No. 2, you are helping preserve a beloved piece of Americana.

So, let's talk about what Wigwam Village inventor Frank Redford got right, what he got wrong, and what it's like to "sleep in a wigwam." 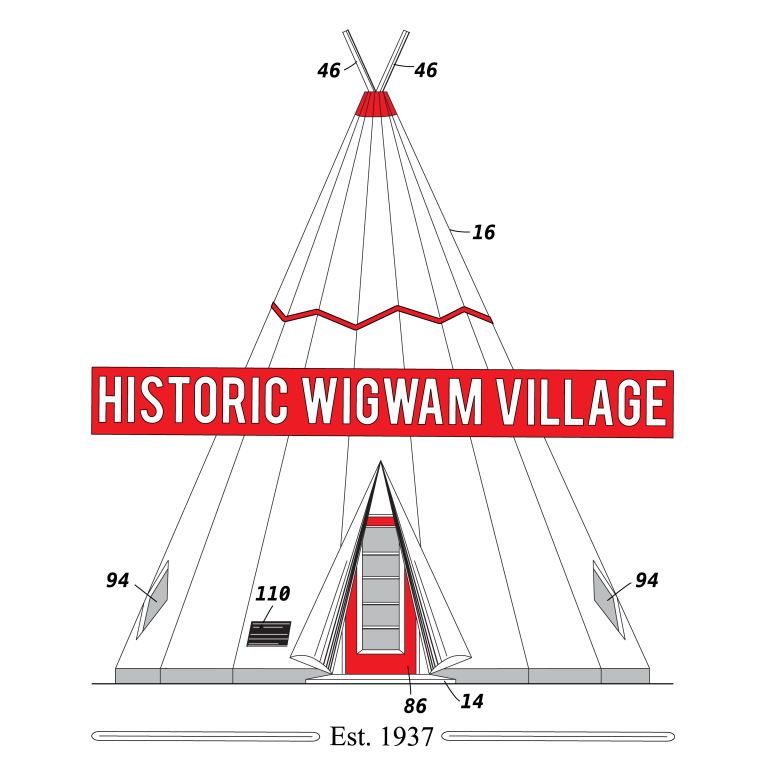 Just as Historic Wigwam Village No. 2 is a vacation destination, coincidentally, Kentucky native Frank Redford was on a trip when he found his inspiration to design and build his first Wigwam Village in Horse Cave, Kentucky (just down the road from Historic Wigwam Village No. 2). While visiting Long Beach, California, Redford sighted a barbecue restaurant shaped and painted like a traditional teepee. Upon returning to Horse Cave, he opened a lunch counter and gas station in 1933 that was shaped like a teepee. After customer encouragement, he expanded his business in 1935 to include six concrete teepees for sleeping.

Ever the entrepreneur, Redford built Wigwam Village No. 2 in 1937, making it bigger and better than No. 1 (which no longer exists, alas). No. 2 features 15 teepees and a much larger teepee that would house a lunch counter big enough for 30 diners and a gift shop and a gas station out front. He located it in Cave City on Highway 31W, counting on its proximity to Mammoth Cave National Park (which today draws 500,000 visitors a year) to boost his business. He was right. The busy north-south highway, the main route between Michigan and Florida, kept his wigwams filled almost every night. Soon, he franchised Wigwam Villages around the country. Seven in total were built — No. 3 in New Orleans, No. 4 in Orlando, and No. 5 in Birmingham. Only No. 2, No. 6 in Holbrook, Arizona, and No. 7 in Rialto, California remain.

Now — what Redford got wrong.

And Redford’s teepees are not temporary. They are made of steel and wood framing covered in stucco. The Big Wigwam at Wigwam No. 2 alone has 18 tons of steel in it. He patented the building construction in 1936 and again in 1957 when the first patent expired. There is much poetry and whimsy in Redford’s design. One quaint feature is that the teepees were arranged in a semicircle facing a large grass bowl at the center so to encourage guests to gather with each other around the fire pits and playground. Today’s travelers probably do not think about meeting other people staying in the same motel, but it certainly would have seemed more natural and even appreciated back then, in a time before cell phones and TV. This old-fashioned social networking tool still works today, as most nights you will find guests getting to know each other around the fire pits while their children play nearby. 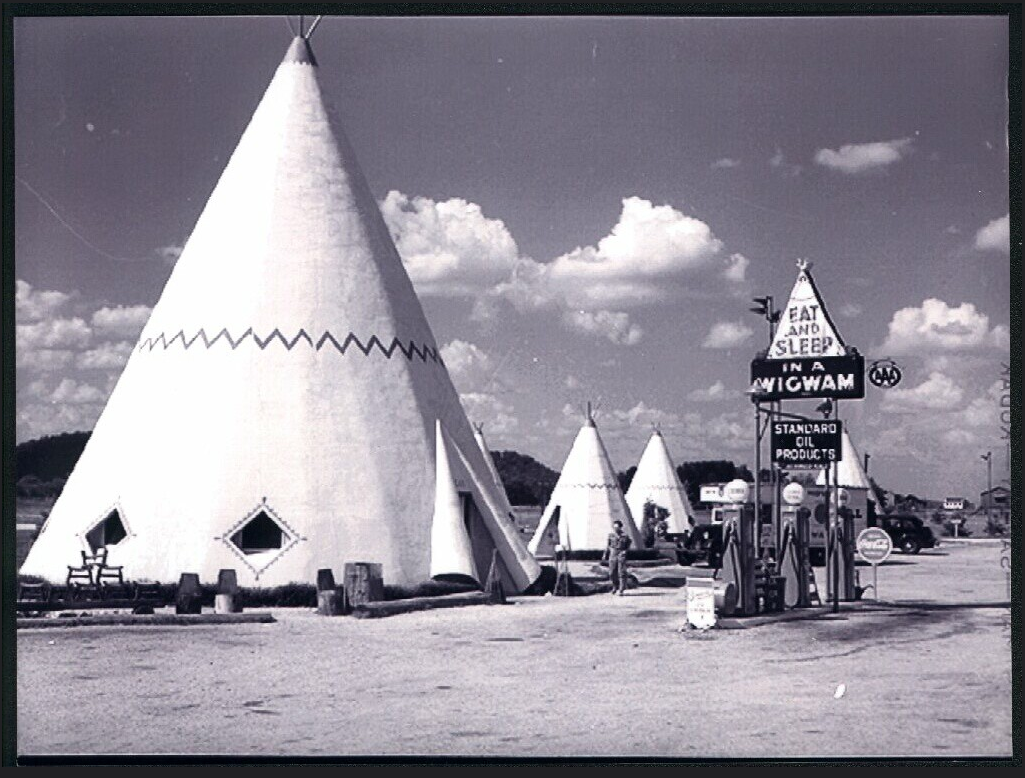 Another of Redford’s missteps was the use of the wigwam motif in the first place. It was cultural appropriation: the use of an element or elements of one culture or identity by members of another culture or identity. Certainly, 84 years later, we as a society recognize this was just plain wrong. Whether Redford considered this is not known. But what is clear is that Redford was a businessman who thought he could get people into his motel by focusing on another facet of 1930s America — the romanticism of the West as a frontier and the emerging popularity of the automobile and motel, which made it affordable for just about anyone to find their own adventures. Redford’s wigwams recall an era when the journey was perhaps more exciting than the destination. In its application for listing on the National Register of Historic Places, Wigwam Village was described as: “one of the most historic forerunners of a practice now known as place-product-packaging the commercial use of architectural imagery by automobile service-oriented establishments along the American roadside.”

So, how can we reconcile the motel chain’s politically incorrect imagery today? Katie Algeo’s paper, “Indian for a Night: Sleeping with the ‘Other’ at Wigwam Village Tourist Cabins,” explores how these motels provide us in the 21st century an anthropological view of how Americans lived in the 1930s and what motivated them:

“Clearly Redford had settled on the teepee design as a roadside attraction before he conceived of it as a home-away-from-home, which raises the question of the original meaning of Redford’s teepee. This article contends that Wigwam Village teepees represent much more than shelter for a mobile population. They hold meanings that are multiple, fluid, and complex. … Reflections upon the contemporary tourist encounter at Wigwam Village suggest that one reason for the surprisingly enduring appeal of this decidedly un-politically correct landscape is that tourists’ associations with the Village are turned inward on themselves and their own pasts and that nostalgia rather than exoticism is the dominant lure.  … Wigwam Village capitalized on the appeal of kitschy roadside attractions and Americans’ fascination with Native Americans.”

When asked about the Wigwam Villages, David “Thundering Eagle” Fallis, principal chief of the Southern Cherokee Nation of Kentucky, told a writer for the National Trust for Historic Preservation in 2013: “Though the Southern Cherokee Nation of Kentucky would be extremely pleased for anything that brings attention to the history and ongoing plight of Native Americans everywhere, we do not welcome such things as ‘Wigwam Village.’ It is an absolute absurdity to portray Native Americans of this area as ‘wigwam’ dwellers.” Helen Danser, chair of the Kentucky Native American Commission and member of the Native American Intertribal Alliance in Kentucky, told the writer that in regards to Wigwam Village No. 2: “I’m not opposed to it being there if it’s done in an appropriate manner because it would be a wonderful teaching tool.”

Today, we as caretakers of Historic Wigwam Village No. 2 certainly acknowledge the cultural theft the motel represents and want to provide context and background to help our guests understand its ramifications. We also want to celebrate Historic Wigwam Village No. 2’s place in Americana, the cultural identity, and the history of our country. For instance, if you examine the Wigwam Village chain purely as a business enterprise, you will find that Redford was a pioneer in making travel available for everyone. Historian Keith A. Sculle wrote in his essay “Frank Redford’s Wigwam Village Chain – A Link In the Modernization of the American Roadside”:

“Personal satisfaction with the tepee motif most likely explains Redford’s persistent use of it, for there were not enough other motels in the area that unusual architecture was necessary to attract business. But Redford’s tepees doubtless did arrest the passerby’s attention just because they were an unexpected curiosity. They also lured some to stop because of their implied message or programmatic value. The teepee’s implied message was a promise of simple pleasure. Redford knew it and put up neon signs: ‘Eat and Sleep In A Wigwam.’ Many asked if they could do just what the signs invited; and after their stay, some told the personnel at the motel that they had had fun.”

Nearly a century later, they still are fun!

A collection of antique postcards featuring Historic Wigwam Village No. 2

We offer free hot coffee and tea in your wigwam.

We clean each guest room according to CDC recommendations. Need anything during your stay? Contactless service is just one text message away.

We offer a variety of convenience items and souvenirs at our concession stand. Open nightly from 6-9pm.

We can manage group reservations for you! Let us keep track of deposits, payments, and cancelations for large parties booking 5 or more teepees. We also offer buy-out packages for exclusive access to the entire Historic Wigwam Village.

The internet is a wild place! You never know what kind of domain squatter will pretend to be us and post hysterical, yet false information about Wigwam Village No 2 on the internet. Maybe you can’t believe everything you read on the internet, but you can believe this. We are focused on providing a vital service and creating memories for a lifetime. If that’s what you want, then book right here for our very best rates.

If you have any issues with your reservation, call 1-833-WIGWAMS. You can also text. 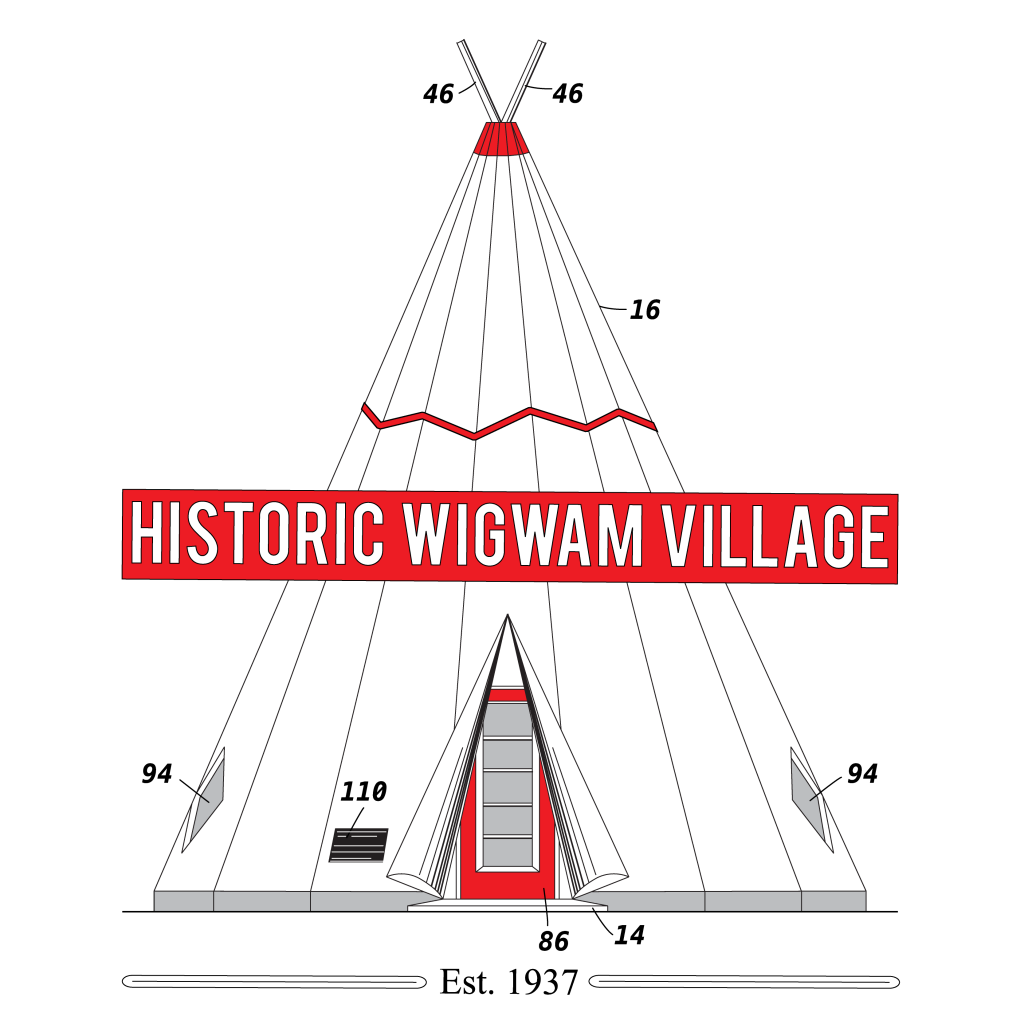 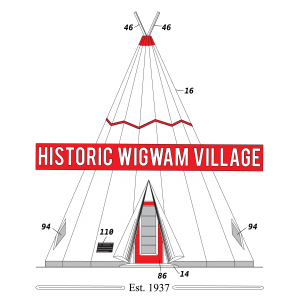 Sleep Outside of The Box

Check out our YouTube channel. It’s the next best thing to actually being here.